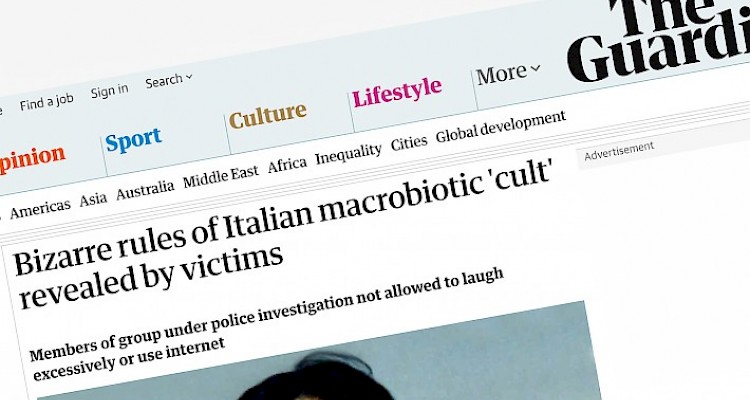 italian macrobiotic 'sect' - a letter to the guardian

Macrobiotics and the Management of Diabetes

Video - The Art of Longevity

Italian macrobiotic 'sect' - a letter to the Guardian

If "macrobiotic sect" were to be accepted, we could also say "soccer sect," or "vegetarian mafia," or even "feminist cult." And neither of these expressions alone is tolerable. Because? There is no soccer sect, there may be a sect (a group of people with a charismatic leader) who uses football to attract new members who will be manipulated and controlled by other ways than football. There will also not be a vegetarian mafia because that would mean that all its members are obligatorily vegetarian. Or is it a mafia that controls vegetarianism?! Confusing, isn't it ?! And in the same way, feminism can inspire any kind of cult, but feminism can never be confused with the cult itself. The essential point here is that you can not confuse the message with the messenger or the way the messenger transmits it.

Macrobiotics exists and has been practiced in many countries for more than 60 years and in its genesis is respect for the environment and responsibility of each one in their choices of food, physical activity and lifestyle. Freedom and individual responsibility are the basis of Macrobiotics, and for that reason, everything that is said about the crimes of Mario Pianesi excludes him from Macrobiotics, even though he may advocate himself as being some kind of "supreme Macrobiotics' Messenger".

What disgusts us in the news is the ease with which it is suggested that Macrobiotic is in itself a way of life potentially dangerous in terms of individual health and leading to illegality, lack of respect for human rights and fanaticism.

Many people work and live honestly and healthy practicing Macrobiotics daily and are greatly harmed by articles like these. If you, as journalists and responsible for the truth of whatever you write, do not want to go to the trouble of doing a serious investigation into the course of Macrobiotics, portraying this practice that unquestionably influenced the development of natural and healthy food as we know it today, at least you should change the published articles refraining to use Macrobiotics as an adjective for sect or cult.